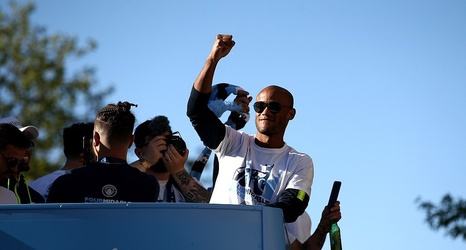 The Treble-winning stars of Manchester City have showed off their array of silverware to supporters on Monday evening after embarking on a victory parade throughout the city.

Pep Guardiola and his men were greeted by thousands of supporters who came out decked in club colours to witness the historic occasion. Departing captain Vincent Kompany led the celebrations, as the crowds boomed into a repertoire of songs each bearing his name.

Twelve months on from their last Premier League trophy parade, City were back with the FA Cup and Carabao Cup added to the collection and now stand as the first team in the history of English football to have claimed all three within a single campaign.