'Looking forward to a new chapter': Celtic wonderkid Ben Doak, 16, confirms his move to Liverpool on social media after 'snubbing better terms offered by Leeds' to complete a £600k switch to Anfield 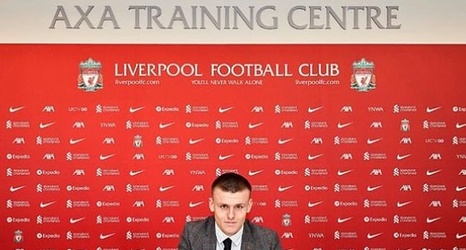 Scottish wonderkid Ben Doak has confirmed his move to Liverpool on social media after the club forked out a £600,000 compensation fee to sign him from Celtic.

Doak, 16, was attracting interest from a number of teams before the Reds wrapped up a deal last month, with the allure of Jurgen Klopp convincing him to move to Anfield, according to The Athletic.

It is also believed the success of other young players such as Trent Alexander-Arnold and Curtis Jones on Merseyside played a part in his decision.

The highly-rated winger was handed his senior Celtic bow back in January as Hoops boss Ange Postecoglou desperately tried to persuade him to stay put, which saw him become their second-youngest ever debutant.