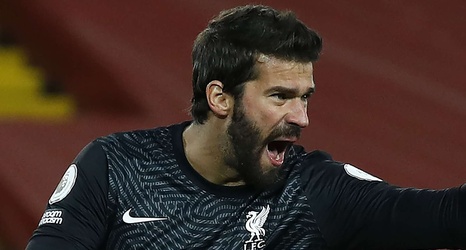 Liverpool goalkeeper Alisson says there was no need for Everton counterpart Jordan Pickford to make the tackle on Virgil van Dijk that resulted in the defender's serious knee injury.

Van Dijk will be out for several months after sustaining ligament damage when Pickford challenged him in the Everton box just 11 minutes into the Merseyside derby this month.

Pickford escaped a red card for the tackle and the England international has faced heavy criticism since, with the likes of Reds boss Jurgen Klopp, midfielder Georginio Wijnaldum and Southampton manager Ralph Hasenhuttl among those who have voiced their shock at the clash.