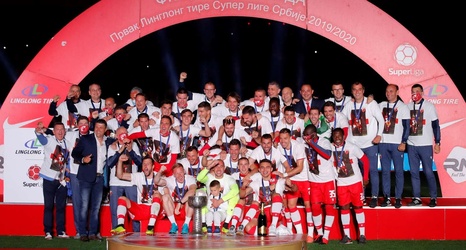 Five Red Star Belgrade players have tested positive for the Covid-19 coronavirus in the wake of their SuperLiga title triumph in front of several five-figure crowds, the club has confirmed.

The Serbian champions confirmed the news less than a fortnight after they faced cross-city rivals FK Partizan in their Serbian Cup semi-final defeat, with around 25,000 fans in attendance.

Marko Gobeljic, Njegos Petrovic, Dusan Jovancic, Marko Konatar and Branko Jovicic have all subsequently come back with affirmative results for the illness, with all but the latter having been left out of the club's final game of the season against Proleter on Saturday.