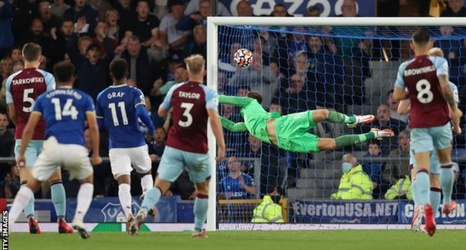 Andros Townsend's brilliant goal capped another comeback win for Everton as victory over Burnley moved them level on points with the Premier League's top three.

Townsend, a free transfer arrival in the summer, also set up an equaliser for Michael Keane, whose header cancelled out Ben Mee's nodded finish on his 200th appearance for the Clarets.

Five minutes later, the Everton winger scored himself with a curling 25-yard finish into the top corner to send Goodison delirious.

It got even better for the home fans as a minute later Abdoulaye Doucoure's lovely through ball found Demarai Gray, who tucked past Nick Pope for his third goal of the season.