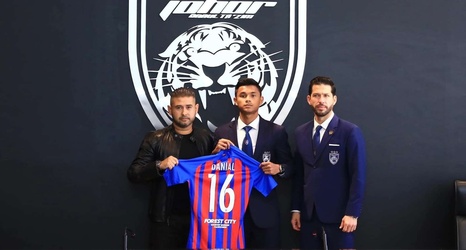 Young midfielder Danial Amier was officially unveiled as the latest signing for Johor Darul Ta'zim (JDT) on Tuesday morning as he adds to the plethora of options available to the seven-time Malaysia Super Champions for the 2021 season and beyond.

Moving away from Felda United, the 23-year-old central midfielder who is also a Malaysian international has inked a 2-year contract with the Southern Tigers, giving him a chance to not only compete for the highest honours in the country but also a chance to feature in the AFC Champions League.

Club owner Tunku Ismail Sultan Ibrahim (TMJ) could not hide his delight in his latest capture and firmly believes that Danial is one for the long-term as JDT begins the a phase of replacements for the local players who have or are close to the wrong side of 30.