Brendan Rodgers admits he was UNHAPPY with his Leicester City side at half-time... despite the Foxes blitzing West Bromwich Albion with THREE first half goals on their way to a comfortable victory 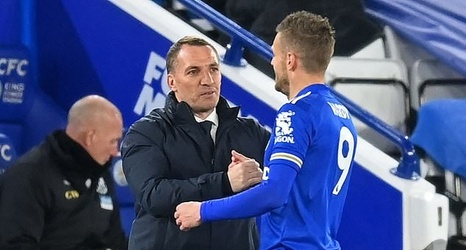 Boss Brendan Rodgers has called for complete focus in Leicester's race for the Champions League.

Jamie Vardy scored his first goal for two months as the Foxes inched towards a Champions League return after victory over West Brom.

Strikes from Jonny Evans and Kelechi Iheanacho wrapped up a 3-0 win inside 40 minutes at the King Power Stadium on Thursday.

The Foxes, third in the Premier League, are now four points clear of fifth-placed West Ham.

Victory came after Leicester reached the FA Cup final for the first time in 52 years following Sunday's semi-final win over Southampton and Rodgers wants no distractions.