Arsenal's Pierre-Emerick Aubameyang is proving ineffective on the wing after five league games without a goal (his worst drought since 2014)... it is now ESSENTIAL Mikel Arteta axes Alexandre Lacazette and plays star man centrally 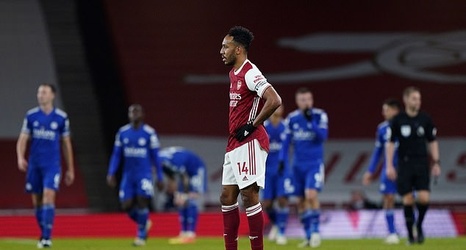 As Arsenal struggled to find the breakthrough early on against Leicester - despite dominating proceedings - their fans were taking to social media predicting what was about to come.

That prediction? A Jamie Vardy 1-0 winner late on after coming on as a substitute to terrorise Arsenal's defence once more.

Vardy loves a goal against Arsenal. He has now scored 11 times against the Gunners. Only compatriot Wayne Rooney has scored more against them, with 12 to his name.

Sunday's outcome was far too predictable for many Arsenal fans who have watched their side week in, week out recently.