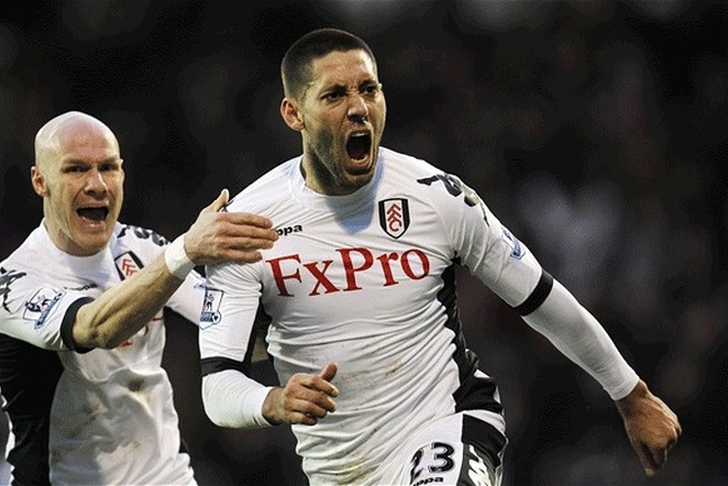 Fulham has a long association with players from the United States (and of course is now owned by Shahid Khan, owner of the Jacksonville Jaguars), and some of its most-loved players in recent years have been American. From goalkeeper Marcus Hahnemann, who was part of the Jean Tigana side that stormed into the Premier League in 2000-2001, to Carlos Bocanegra, who was a vital cog in the side in the Great Escape of 2007-08 under Roy Hodgson, to Brian McBride who captained the club and was Player of the Year in 2005-06 and 2006-07, to current Player of the Year Tim Ream, US players have held a special place in fans’ hearts at Craven Cottage.

And perhaps none more so than Clint Dempsey. The Texan played for the Whites 231 times and scored 60 goals in two spells at the club from 2007-12 and again in 2014 (although most Fulham supporters tend to pretend that the second one didn’t happen). Dempsey was an integral part of the side during what was arguably the most successful period in the club’s 139-year history, which culminated in a seventh-place finish in the Premier League in 2008-09, followed by an appearance in the Europa League Final in 2010 against Atlético Madrid in Hamburg.

Since Dempsey announced his retirement from professional football in August 2018, Fulham fans have taken to social media to express their love for the club’s record Premier League goal scorer and to relive the glories of the 2008-09 league campaign and the magical Europa League run which etched his name into Fulham folklore forever. Although the Whites had an outstanding Championship season in 2017-18, at one stage going 23 games unbeaten and winning promotion back to the Premier League via the play-offs; at this stage it doesn’t look as though the Hodgson glory years, of which Dempsey was a vital component are going to be surpassed any time soon, with many leading betting sites putting Fulham amongst the contenders for relegation this season.

Clint Dempsey also had a distinguished career with USMNT, making 141 appearances and scoring 57 goals, during which time he achieved a number of milestones, including captaining his country at the 2014 World Cup and becoming the first American player to score in three tournaments. Dempsey also made a significant impact in MLS, first with New England Revolution and latterly with Seattle Sounders, with whom he won MLS Comeback Player of the Year for 2017 after scoring 12 goals in 29 appearances.

However, it is probably fair to say that Dempsey’s MLS and USMNT records are overshadowed by what he achieved at Fulham. Named Player of the Year in 2010-11 and 2011-12, Dempsey scored some outstanding — and vital — goals during his time at Craven Cottage, one of which is considered amongst the very best goals ever scored for the club. Fulham fans always loved his passion and energy, but over time also came to appreciate what a technically skilled player he could be, while his physical strength meant that he often got on the end of through balls and crosses that other players simply couldn’t. He scored 17 goals in the 2011-12 Premier League campaign (23 in all competitions), a record for the club in the top flight, and was the first US player to score a Premier League hat-trick in January 2012, following it up with another in the next game.

However, despite his overall consistency and commitment to the team at Fulham, there are two stand-out individual moments that mean Clint Dempsey will forever be a part of the club’s history.

The first of these was also his first goal for the club. Fulham were not safe from relegation coming towards the end of the 2006-07 Premier League season and were facing a strong Liverpool side at Craven Cottage. No-one realistically expected the Whites to win this final home game, which would have meant Fulham relying on results elsewhere going their way if they were to be safe. However, Dempsey scored a wonderful solo goal, exchanging passes with Liam Rosenior on the edge of the box and then bursting through to score with his right foot from close range — albeit the shot was probably scuffed! Fulham held on to take all 3 points from the match, eventually avoiding relegation and earning another season in the Premier League by a solitary point, and Dempsey’s goal was absolutely central to this.

Then there was the Juventus game. Fulham had amazingly reached the quarter finals of the 2009-10 Europa League where they were drawn against Italian giants Juventus. The Whites were soundly beaten 1-3 in Turin and then quickly went a goal down in the return leg in London, meaning they trailed 1-4 on aggregate. Then began one of the most remarkable comebacks in European football history.

Bobby Zamora scored in the 9th minute (2-4), and then Zoltan Gera netted twice more in the 39th and 49th minutes (the second from the penalty spot) to make the score 4-4 on aggregate. In the 82nd minute and with extra time looming, Dempsey picked up the ball with his back to goal on the edge of the penalty area. With a good first touch he bought himself some space, and then swiveled on his right to attempt an audacious chip from about 20 yards out. The ball seemed to take forever to get there, but it eventually looped over the goalkeeper’s head to nestle in the top corner of the net at the Hammersmith End — cue delirium in SW6 as Fulham went ahead 5-4 on aggregate, which was enough to get them through to the semi-final against Hamburg.

It was an exquisite piece of skill in a moment of high tension and drama, and for this reason Dempsey’s goal against Juventus is widely regarded as being one of the best — and most significant — goals ever scored by a Fulham player. If he had not already done enough to endear himself to the Craven Cottage faithful, this one sublime moment means that Clint Dempsey’s name will be revered at Fulham for evermore.