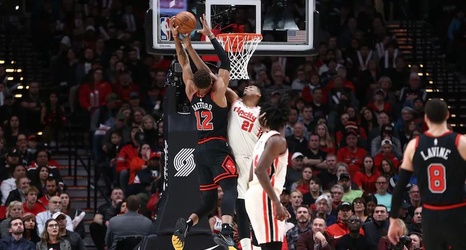 PORTLAND -- Hassan Whiteside apparently didn't get his fill of stuffing at Thanksgiving dinner.

The 7-0 center blocked a franchise-record 10 shots to help the Trail Blazers defeat the Bulls 107-103 in front of a sellout crowd of 20,139 Friday night at the Moda Center.

With the win, the Trail Blazers are now 8-12 overall and 3-4 at home this season. They have now won three in a row for the first time this season and extend their win streak versus the Bulls to seven games.

The Blazers lead by as many as 12 points in the third quarter and looked as though they might pull away from a Bulls squad that they blew out a few nights ago in Chicago.