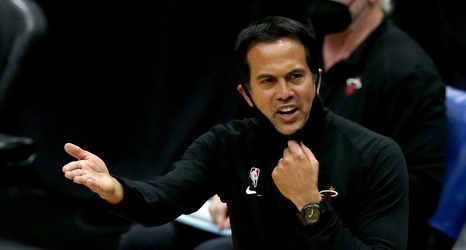 The Miami Heat effectively blitzed and stifled the Trail Blazers potent backcourt on Sunday. The Heat claimed a 107-98 victory over the Blazers and held Damian Lillard to just 12 points. After the game coach Erik Spoelstra spoke to Sun Sentinel reporter Ira Winderman about an unlikely boost that the Heat gained due to Saturday’s practice conditions.

According to the story, the Heat utilized Portland State’s gym for Saturday’s practice. Spoelstra explained that the gym lacked a NBA three-point line, so Miami utilized the half-court stripe as a reference point for its aggressive defensive scheme.