POWER RANKINGS » Back On Track In Week 7 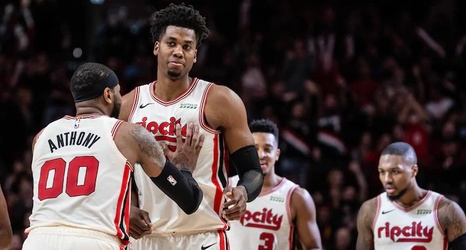 It's been a couple of weeks since we last had an opportunity to check in on the weekly Power Rankings -- spending 11 days on the road followed up by a holiday week will do that -- and in that time, the Trail Blazers experienced both their lowest low and highest high so far this season. Losing four straight, capped by a confounding loss to the Cavaliers, qualified as the worst the first six weeks had to offer, though following that up with three wins, which included stellar offensive performances from Carmelo Anthony and a franchise-record 10 blocks by Hassan Whiteside in a win versus the Bulls, gave the team and their fans something positive to rally around going into December after a tough November.