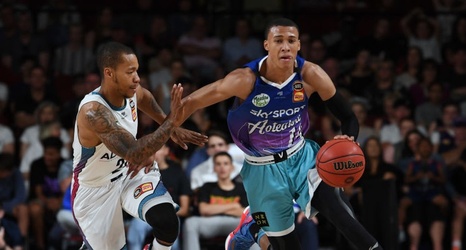 ADELAIDE, AUSTRALIA - NOVEMBER 24: Rj Hampton of the Breakers takes on Jerome Randle of the 36ers during the round 8 NBL match between the Adelaide 36ers and the New Zealand Breakers at the Adelaide Entertainment Centre on November 24, 2019 in Adelaide, Australia. (Photo by Mark Brake/Getty Images)

With the 2020 NBA Draft only a month or so away, the Portland Trail Blazers have begun interviewing prospects. RJ Hampton was one interviewed recently.

RJ Hampton was recently interviewed by the Portland Trail Blazers as a 2020 NBA Draft prospect. Though the NBA draft process isn’t the same as previous years due to COVID-19, there is a Draft combine, and NBA teams are allowed to conduct Zoom interviews with players.