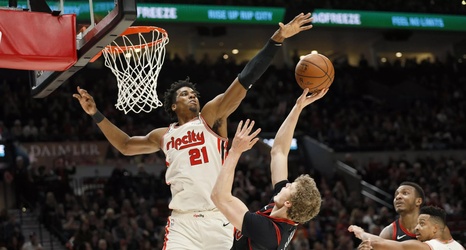 The Portland Trail Blazers ended their week the same way it started, facing off against the Chicago Bulls and coming away with a victory. The 107-103 final score gave the Blazers their first three-game winning streak of the season. Four of the five starters scored in double figures — led by Damian Lillard’s 28 and Carmelo Anthony’s 23 — and Hassan Whiteside had a franchise-record 10 blocks along with eight points and 15 rebounds. Zach LaVine led Chicago with 28 points.

The Blazers started slow, falling behind 11-4 on only 2-of-10 shooting to start the game, prompting a Terry Stotts’ timeout.