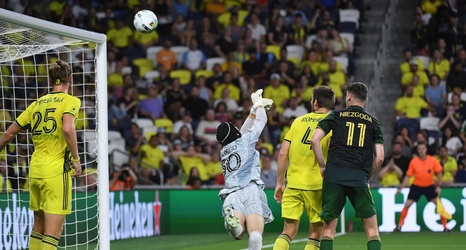 The Portland Timbers rescued a point in humid Tennessee with a six-minute double salvo in the second-half, after Nashville SC scored the first two goals of the match, which ended 2-2. Dairon Asprilla pulled a goal back from the penalty spot in the 63rd minute before Jaroslaw Niezgoda emphatically equalized with a left-footed shot in the 69th minute.

The draw extended the Timbers’ unbeaten streak to four games, taking eight out of a possible twelve points from the LA Galaxy (away), Colorado Rapids, Houston Dynamo, and now Nashville.

Their third game in nine days meant heavy lineup-rotation from Giovanni Savarese, as Diego Chara, Cristhian Paredes, and Bill Tuiloma were all unavailable for selection.