As the NWSL Regular Season Ends, the Year of Angela Salem Continues 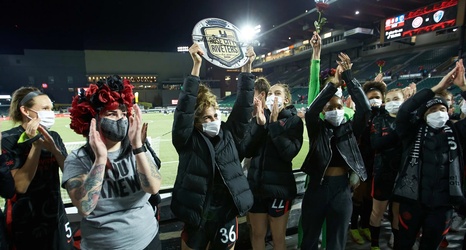 The Portland Thorns celebrated in the North End with the Rose City Riveters after their scoreless draw with the North Carolina Courage on Saturday. The Thorns previously clinched the NWSL Shield in PNC Stadium in Houston and were awarded the Shield before the final match of the regular season in Providence Park.

The Shield wasn’t the only award handed out on Saturday night. The Rose City Riveters gathered the players in front of the North End to announce their Supporters Player of the Year award. Anyone could vote for who they thought should win the award.