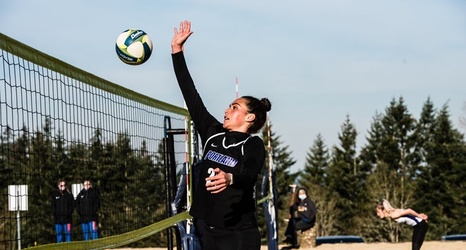 SALEM, Ore.---The Pilots beach volleyball team went 1-1 on Tuesday, defeating Corban 3-2 after Oregon was able to hold off Portland by a 4-1 margin. The Pilots pair of Shayla Hoeft and Alycia Wodke collected two sweeps on the day, the second of which clenched the team win for Portland against the Warriors.

In their season debut, the Portland 2's team of Jayde Harris and Noelani Helm came back to force a third frame and claim a 2-1 against their Corban counterparts.

3's pair Kellie Hughes and Kendall Nolan registered another sweep for the Pilots, defeating a Warriors partnership in set scores of 21-15 and 21-18.