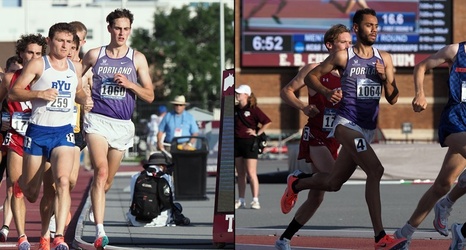 COLLEGE STATION, Texas---Pilots track and field runners Cathal Doyle and Caleb Webb have both landed spots in the men's 1500 meter quarterfinal race of the NCAA Championships after standout performances in their first round heats at the NCAA West Preliminary Meet hosted by Texas A&M on Wednesday night.

Doyle claimed second place in his 1500m heat at 3:45.48 to collect 15th place overall and move on to the next round of competition. Webb finished right after in 16th place with a time of 3:45.50 to also qualify for the next round. The top five runners of each of the four heats as well as the next best four times have all advanced to the quarterfinal race, which is set for Friday at 5:45 p.