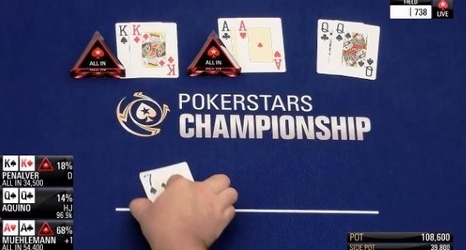 In this hand at the first-ever PokerStars Championship Bahamas, three players received a monster simultaneously. But only one got to profit from it.

With the European Poker Tour – and all the smaller PokerStars tours – now gone, all eyes were on the inaugural PokerStars Championship Bahamas to see how it would be received.

The main event attracted 768 players, so it was quite a sizeable tournament, but on the other hand some of the side events admittedly were a little short on players.

Thomas Mühlemann, a Swiss player, probably didn’t care about the number of players in the side events when he woke up with pocket aces on Day 2 of the main event.