Steelers Rally, Stun Broncos 34-27 In Pittsburgh With Huge Second Half 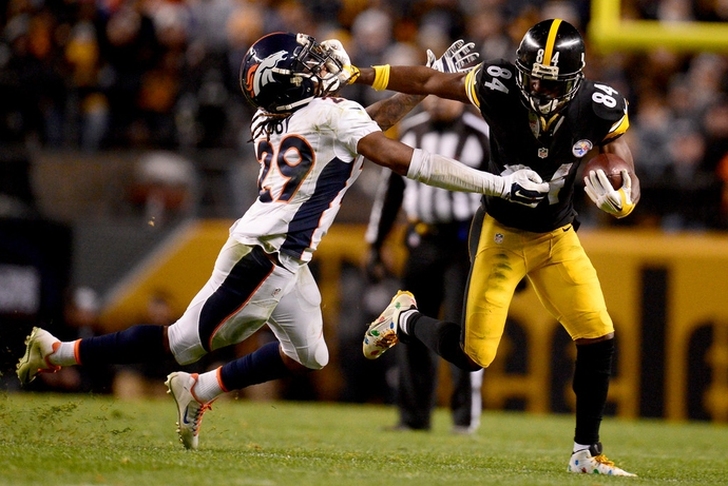 The Pittsburgh Steelers kept pace with the Kansas City Chiefs and New York Jets in the AFC Wild Card race, rallying in furious fashion to defeat the Denver Broncos 34-27. Pittsburgh moves to 9-5 with the home win while Denver falls to 10-4. Here's some notes, quotes and observations from the Steelers' massive victory.

Pittsburgh outscored the Broncos 21-0 in the second half. QB Ben Roethlisberger finished with 380 yards and three touchdowns, with 189 yards and two of those scores going to star WR Antonio Brown.

QB Brock Osweiler led the Broncos to four straight touchdowns in the first half, but went just 7 of 26 in the second.

The Steelers offense will get the plaudits after this one, but give the defense credit for two short-field stops in the game's last four minutes. In fact, credit the defense for shutting out the Broncos after giving up 27 in the first half.

Denver's offense turned the lights off after converting on eight third downs to start the game, missing on its next five. That opened the door for Pittsburgh's offense to claw back in it and over the top.

“I asked Peyton Manning on his way out of locker room if he had any response to a report this morning he had mad [sic] Broncos aware he didn’t want to be a backup. His response; ‘it’s bullshit and it’s insulting.’ I asked if that was on the record he said; ‘yes, I can’t say it any plainer than that.'” -- ESPN's Jeff Legwold

"Mike Tomlin says, if there's a blade of grass, we have to defend it." -- Steelers CB Brandon Boykin

Don't look now but the Denver Broncos have fallen from a near-guaranteed first-round bye to just one game ahead of the streaking Chiefs. Kansas City has won eight straight, gaining ground with two late collapses by the Broncos in two weeks.

By virtue of tiebreakers, the Pittsburgh Steelers slot into the #6 seed right now -- behind the 9-5 Chiefs (#5) and ahead of the 9-5 Jets (#7). Despite ending with two road games, Pittsburgh may have the easiest closing schedule of the three with games against the bottom-feeding Ravens and Browns remaining.