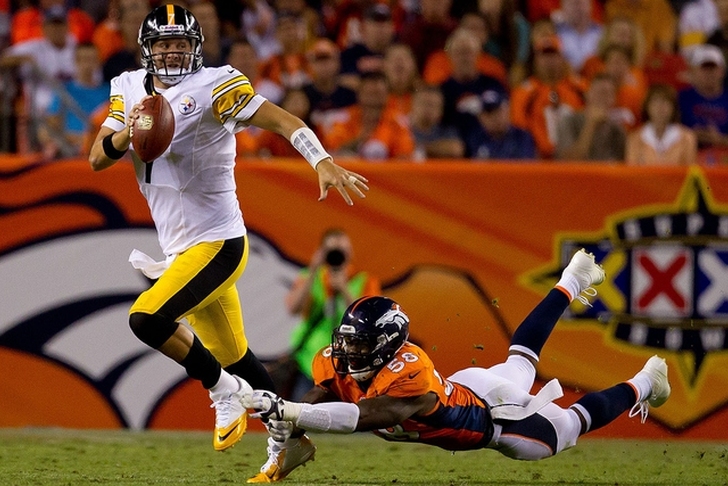 In a first half with limited scoring, the Pittsburgh Steelers lead the Denver Broncos 10-9. The Steelers have managed to put together 195 yards of offense, while the Broncos have 164.

Third downs have been a major issue for both sides. The Broncos are 1 for 8, while the Steelers are just 2 for 8. Both teams are 0 for 1 on fourth down tries.

The Denver running game hasn't done much, picking up 65 yards on 13 carries. The bulk of that came on one 34-yard run by C.J. Anderson. That's left Peyton Manning to shoulder most of the load. He's completed 11 of 22 passes for 99 yards.

Ben Roethlisberger is clearly not 100 percent, but he's outplayed Manning thus far. He's completed 9 of 15 passes for 132 yards. He's also been sacked twice for a loss of 15 yards. The Steelers have yet to sack Manning.

The Steelers running game has been solid, racking up 78 yards and a score on 13 carries. The bulk of that damage came via a 40 reverse by WR Martavis Bryant.

The Steelers scored the first and only TD of the game on the next drive. Pittsburgh added another field goal in the second quarter to stretch the lead to 10-6. Denver added a field goal as time expired in the second half.

The Broncos will receive the ball to start the second half.