Zach Gentry: Pat Freiermuth Already ‘One Of My Good Buddies For Sure’ 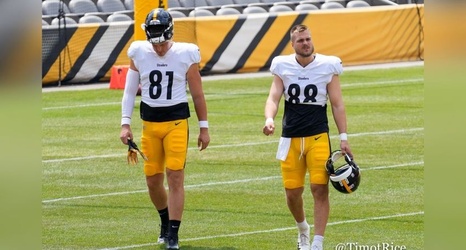 Is the Pittsburgh Steelers’ tight end room suddenly a strength? At the very least, for the first time in a while, they actually have three tight ends in the room that they feel like dressing for Sundays, with third-year Zach Gentry this year finally graduating from weekly healthy scratch status.

A former fifth-round pick out of Michigan, Gentry converted to the position from quarterback while in college, and the Steelers drafted him with the understanding that he would need time to develop. Now he’s making a nice little one-two blocking combination with rookie second-round pick Pat Freiermuth.

Freiermuth, the Penn State product, is the face of the position for the future, the first tight end that they have drafted in the first four rounds in more than a decade.