WR Amari Cooper Runs All Over Steelers’ Secondary In Win 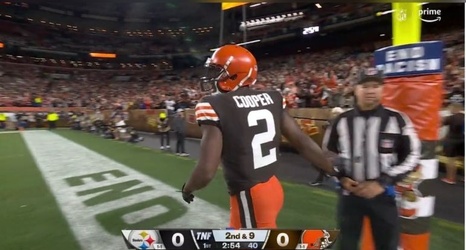 While much of the attention on Thursday night was pointed toward the Pittsburgh Steelers and their run defense, it was their secondary that had a rough outing, especially in the second half. While speaking to the media following the action, Alex Highsmith commented on Cleveland Browns’ star wideout Amari Cooper, who broke through the century mark with 101 receiving yards.

WR Amari Cooper led the Browns in receiving with seven receptions for 101 yards (14.4 average) and a touchdown. #Steelers #NFL

Acquired via an offseason trade with the Dallas Cowboys, Cooper is still one of the top receivers in the NFL, and his big play ability was on full display against the Steelers.