‘That’s A Play I Have To Make’: JuJu Smith-Schuster ‘Glad’ Ben Roethlisberger Threw End-Zone Ball That Was Picked Off 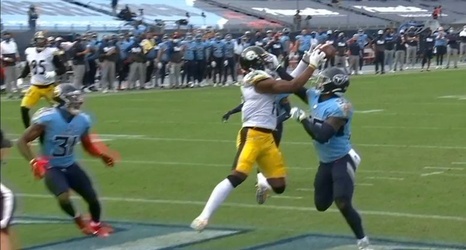 Ben Roethlisberger entered yesterday’s game with just one interception on the season on 165 pass attempts. He attempted 49 passes against the Tennessee Titans. Three of them were intercepted. After the game, he called that performance unacceptable, though arguably the most frustrating one was the interception off of a pass batted down at the line, as he had trouble consistently clearing the line of scrimmage due to batted passes during the game.

The final interception nearly did the most harm, however, as it came with just minutes left in the game, inside of field goal range, with the Steelers up 27-24.