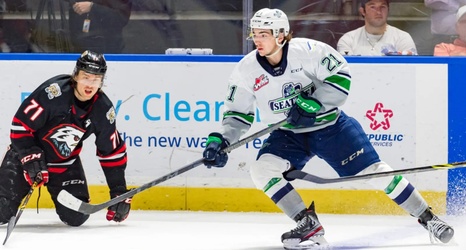 Penguins forward prospect Lukas Svejkovsky and his Seattle Thunderbirds eliminated Penguins goaltending prospect Taylor Gauthier, defense prospect Ryan McCleary, and the Portland Winterhawks in Game 7 of the second round of the WHL playoffs on Tuesday night.

The Thunderbirds erased a 3-1 series deficit and won Game 7 on the road by a score of 6-3. Svejkovsky, the Penguins' fourth-round pick in 2020, scored Seattle's fifth goal of the game in the win:

McCleary, the Penguins' seventh-round pick in 2021, was scoreless for Portland in Game 7.