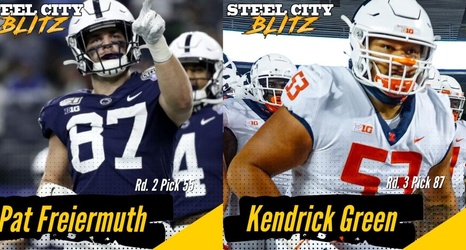 After selecting Alabama RB Najee Harris in the first round of the 2021 NFL Draft, the Steelers have two additional selections on the second day of the draft. For just the second time in the last decade, the Steelers used all 3 of their picks on the first two days on one side of the ball. The Steelers certainly seem determined to take players with a nasty streak who are tough football players. Kevin Colbert, Mike Tomlin, and Tight Ends coach Alfredo Roberts attended Penn State’s Pro Day and the team used their second round pick on Pat Freiermuth.