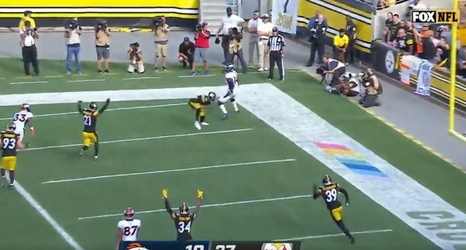 Throughout Sunday’s 27-19 win over the Denver Broncos at Heinz Field, the Pittsburgh Steelers experimented quite a bit defensively, specifically in its dime defense, without Cam Sutton on the field as the veteran cornerback was inactive Sunday with an injury.

Against the Broncos, guys like Robert Spillane, Tre Norwood, Arthur Maulet, and even the practice squad elevated Karl Joseph saw the field in dime, allowing the Steelers to try and spread the work around, as head coach Mike Tomlin said after the game in regards to some of the personnel in the sub-package.

“Dime personnel defensively, we were just spreading Cam Sutton’s work around among a group of people as opposed to putting it on one person,” Tomlin said following the win in his official press conference, according to Steelers.