Steelers Fall Short On Thursday Night Against Browns, Fall To 1-2 With 29-17 Loss 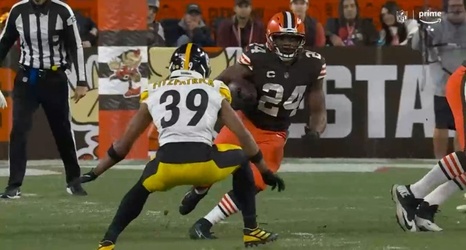 The Pittsburgh Steelers headed to Cleveland on a short week to try and rebound from their Week 2 loss to the New England Patriots but they couldn’t do so, losing 29-17 on Thursday Night Football.

Cleveland opened with possession after they won the toss and chose to receive. RB Nick Chubb had a 13-yard first down run on their second play of the drive, but it was the only first down the Browns would get. After a 3rd and 10 incompleted by QB Jacoby Brissett, the Browns punted away. P Corey Bojorquez’s punt went for a touchback.

Pittsburgh’s opening offensive play was a first down completion to WR Diontae Johnson on a rollout pass from QB Mitch Trubisky.