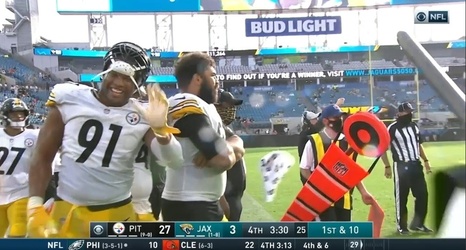 That’s just what the Pittsburgh Steelers are through 11 weeks following a dominant 27-3 win on the road over the Jacksonville Jaguars Sunday in the rain.

Ben Roethlisberger dialed up the deep ball for the second consecutive week, Diontae Johnson had a career game, the run game got back on track and Minkah Fitzpatrick and Terrell Edmunds turned the air in Duval into a No Fly Zone with two picks each, leading the Steelers to the 24-point win.

There’s still plenty of improvement to be made on both sides of the ball, but it was nice to see the Steelers cruise to another win over a below-average opponent, getting some backups into the game with a short week ahead.