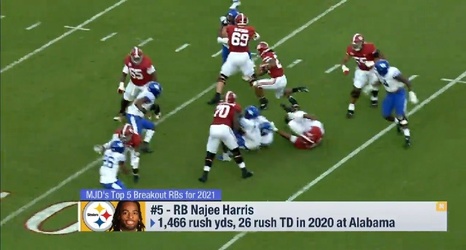 On Thursday, NFL Network’s Maurice Jones-Drew broke down his top five breakout running backs for the 2021 season on “Good Morning Football” and the Pittsburgh Steelers 2021 first round draft pick made his list.

Jones-Drew has Steelers rookie running back Najee Harris fifth on his list and below is reason for ranking him there.

“The thing about Najee Harris, he is from Antioch, California, my hometown, right? So, he has to be on this list,” Jones-Drew said. “Not only that, though, 6’1″, 235 pounds, can run inside, run outside. He’s so versatile. They didn’t really utilize him at Alabama the way he was able to go out and catch the ball out of the backfield.