Matt Canada: Zach Gentry ‘A Big Guy Who Can Block’ And Be ‘A Threat In The Passing Game’ 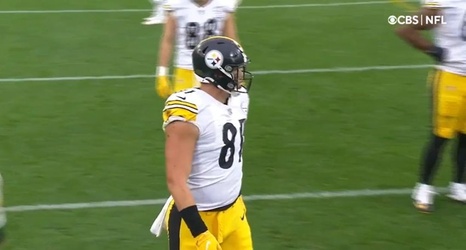 The Pittsburgh Steelers’ offensive identity—such that they have one—will necessarily have to evolve over the course of the season, if not simply to account for the loss of wide receiver JuJu Smith-Schuster, who has been their most consistent presence for the past four-plus years.

The veteran suffered a season-ending shoulder injury during Sunday’s game, only the second time in his career he will have missed significant time, following a knee injury he dealt with in 2019. One possibility we may see in terms of adjustments in his absence is an increase in two-tight end sets.

It helps that the Steelers, finally, after many years without, have three tight ends that they light and are willing to play.