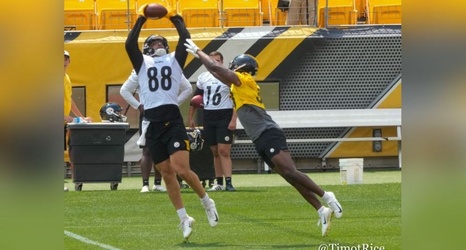 The Pittsburgh Steelers have added top-60 selections, over the course of the past two drafts, to all three of the offensive skill positions. They drafted wide receiver Chase Claypool 49th overall last year, before selecting running back Najee Harris in the first round in April. They stayed on offense when they moved into the second round, with the long-awaited addressing of the tight end position, with Pat Freiermuth.

Though a shoulder injury caused the team to err on the side of caution and hold him out of the preseason debut Hall of Fame game, the big man out of Penn State has been impressing his coaches and teammates since rookie minicamp, particularly as a receiver, though he is developing as a blocker.