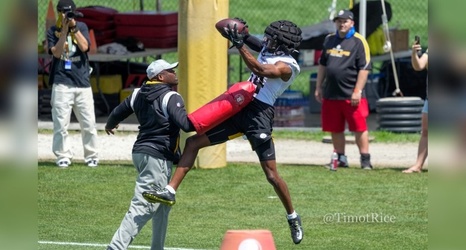 Coming away from April’s draft, it was hard not to be excited about the Pittsburgh Steelers’ 2nd and 4th round picks in George Pickens and Calvin Austin III. The Steelers find receiver talent better than any team in the league and spent this offseason restocking the shelves after losing JuJu Smith-Schuster, James Washington, and Ray-Ray McCloud to free agency. They’re aiming to replace that trio with a better pair of names. Nearly two weeks into training camp, OC Matt Canada can’t help but be impressed about the progress the two drafted rookie wideouts are making. Canada joined Sirius’ Movin’ The Chains with Jim Miller and Pat Kirwan to discuss Pickens and Austin.