Lamar Jackson To Teammates After Throwing 4 Picks In Victory: ‘I Owe Y’all’ 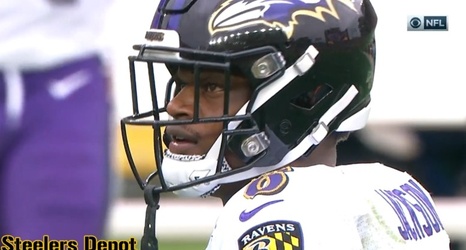 The Baltimore Ravens’ Lamar Jackson played…not great last night. Fortunately for them, he didn’t have to, in no small part because the Cleveland Browns’ Baker Mayfield was no better. Baltimore wound up on top, 16-10, but Jackson struggled to protect the ball, throwing a career-high four interceptions, including three in the second quarter on consecutive drives.

“I’m hot, though”, Jackson said of his performance, as in, he’s angry at himself. “I threw four interceptions, three in the first half. I feel like those drives, when the interceptions came, we could’ve done something on those drives. We could’ve put points on the board.