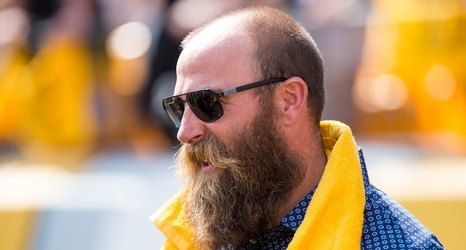 For 10 years, Keisel has hosted "Shear Da Beard," an annual event to benefit the Children's Hospital of Pittsburgh. At the showcase, Keisel, well ... shears his beard. If you need a reminder:

Yeah, it's a pretty amazing beard.

The event is always a winner, too, drawing players, coaches and local celebrities out for a night of fun and charity. This year featured Ben Roethlisberger, James Harrison, Cam Heyward, Ryan Shazier, Mike Tomlin, Donnie Iris and plenty others getting in on the clipping action, but 4-year-old cancer patient Nora Misencik stole the show onstage.