JuJu Smith-Schuster: ‘I Love This Game So Much, More Than Anyone Will Know’ 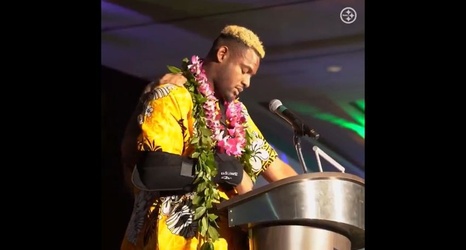 Pittsburgh Steelers wide receiver JuJu Smith-Schuster suffered a significant shoulder injury during Sunday’s game. He had surgery to repair the damage yesterday. But in between, just a day later, sporting a sling on his right arm, he hosted a luau event for his own charity, the JuJu Foundation.

And he was painfully open and transparent about what the previous 36 hours had been like. The team’s Twitter account shared an excerpt of a speech that he gave to those in attendance, displaying his raw emotions about having had the game taken away from him. I will transcribe it, but it’s important to actually watch the video.