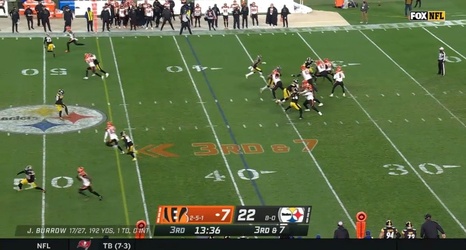 Every week, the Steelers have one guy on the opposing offense they’re trying to take away. Against the Tennessee Titans, it was Derrick Henry. The Baltimore Ravens? Lamar Jackson. Dallas Cowboys? Zeke Elliott.

Pittsburgh had the same intention in Sunday’s win over the Cincinnati Bengals. Only their goal this time wasn’t to take away a runner. It was wide receiver Tyler Boyd. Mike Tomlin praised Boyd leading up to gameday, calling him one of football’s top slot wideouts. FOX announcers Dick Stockton and Jonathan Vilma said Mike Tomlin told them Boyd was the best Pitt player he didn’t draft.