Diontae Johnson On Claypool: ‘Chase Can Play Anywhere On The Field’ 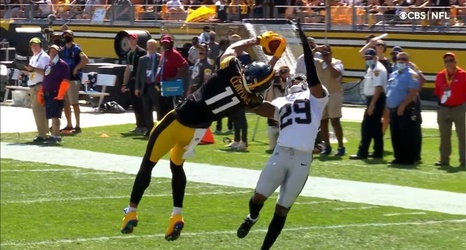 With the Pittsburgh Steelers’ JuJu Smith-Schuster now out indefinitely, the offense has the task of figuring out how to replace his snaps at the wide receiver position, particularly in the slot. While his absence will obviously mean a bigger role for fourth-year James Washington, the biggest question isn’t so much who plays more, but who plays in the slot.

Chase Claypool, last year’s second-round draft pick, is one option, and he made a couple of big catches there on Sunday. He has a few dozen snaps logged in the slot this season out of about 200 on offense.