Despite Similarities To Diontae Johnson, Rookie Calvin Austin III Believes ‘I’ve Got My Own Type Of Game’ 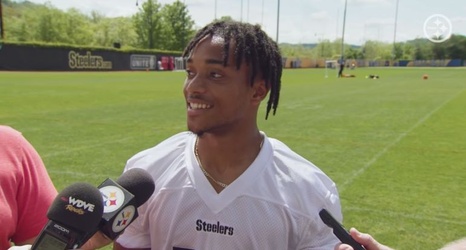 One of the most ubiquitous habits of college scouting is the ‘pro comparison’, when you attempt to draw similarities between a college prospect and a player in the NFL whom you believe that player can be like. When the Pittsburgh Steelers drafted Diontae Johnson, the pro comparison was Antonio Brown.

That hasn’t really been wrong. A lot of the similarities that we saw in college did translate into the NFL. Now especially since he’s been drafted by the Steelers, many people have been comparing fourth-round rookie Calvin Austin III to Johnson, including the beat reporters who had the opportunity to ask him questions during this week’s OTAs—even if he attempted to assert some independence from it.