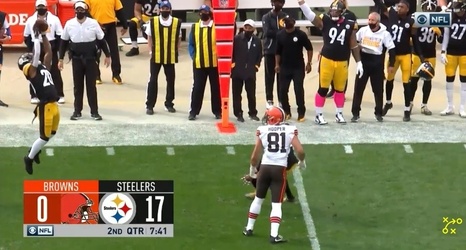 In the Steelers week 6 matchup against the divisional rival Cleveland Browns, who entered the week fresh off a hot 4-1 start behind the league’s leading rushing attack, seeking to gain their first win against at Heinz field since 2003. In a matchup featuring star receivers Jarvis Landy and Odell Beckham Jr, the Steelers secondary answered the bell, helping hold the Browns to a meager 145 passing yards, and grabbing two interceptions, including an early pick six courtesy of Minkah Fitzpatrick.

The Steelers entire secondary provided sticky coverage throughout the game, allowing the pass rush to get home repeatedly, pressuring Baker Mayfield on an absurd 47% of his pass attempts.