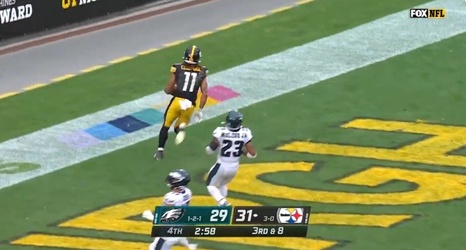 In front of a crowd of 5,000, the Pittsburgh Steelers defeated the Philadelphia Eagles in a game where the Steelers would score 30+ points for the first time since 2018.

Both teams struggled to move the ball offensively out of the gate. The Steelers forced the Eagles into three and outs on their first two possessions. After punting on their first possessions, Ben Roethlisberger and the Steelers engineered a 14 play, 72 yard drive that included three third down conversions. The drive was capped off by a jet sweep touchdown by rookie Chase Claypool, who had a big day for the black and gold.