Calvin Austin III Calls Speed A Consistent Part Of His Game, ‘Didn’t Even Put On The Afterburners’ On Practice TD 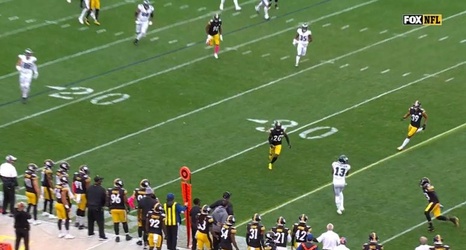 Ignoring the fact that it’s comically early to make any kind of statements like this, one might say that rookie fourth-round draft pick Calvin Austin III was one of the stars of the Pittsburgh Steelers’ first training camp practice, although both rookie wide receivers had their shining moments.

While Austin had a long, blazing catch-and-run touchdown off of a screen from Mason Rudolph, it was the overall cumulative effect of seeing his speed translate—even in practice—at the NFL level that was the biggest takeaway.

Alex Kozora notes that if this were a full-contact drill, he doesn’t believe Austin would have actually scored on that play, but the Memphis alum would probably disagree.