Ben Roethlisberger On His Performance In 2020: ‘I’ll Let You Know When I Feel Like I’ve Played A Good Game’ 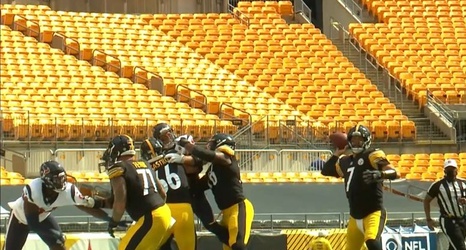 Through three games, Pittsburgh Steelers quarterback Ben Roethlisberger has thrown seven touchdown passes to one interception, leading nine total touchdown drives and 14 scoring drives altogether. He has completed 73 of 109 pass attempts for 777 yards. While his yards per attempt rate and general accuracy could use some fine-tuning, it’s hard to argue that he hasn’t played well so far in the first three games back from a severe elbow injury to his throwing arm.

Unless of course you’re Roethlisberger himself, and then you’re going to be full of complaints about your performance, as he was following yesterday’s game, in which he went 23-for-36 (in a game with at least three or four dropped passes) for 237 yards and two touchdowns with zero interceptions.