Beating The Bengals: Three Plays To Attack Their Defense 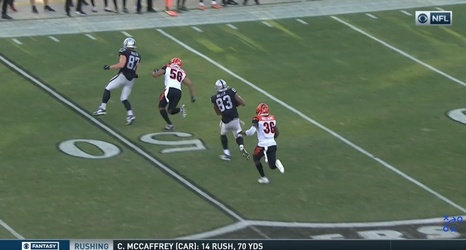 Splash plays. Every team wants them but how do they happen? This article is going to look at the upcoming defense of the upcoming opponent focusing on the three biggest plays they allowed the previous week. It’ll take a look at the whole play including details such as personnel, formations, blocking schemes and route combinations. As a follow up to each play, there will be the Steelers Scenario identifying the player or players who could benefit by running similar plays.

Oakland is deep in their Zone and come out in 12 personnel splitting TE Darren Waller (83) wide left with tight end Foster Moreau (87) as the Y to the left.