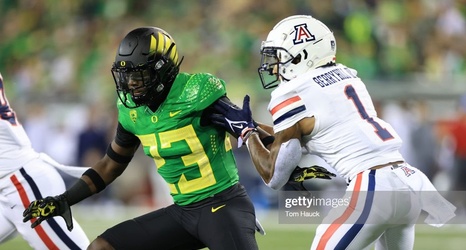 From now until the 2022 NFL Draft takes place, we hope to scout and create profiles for as many prospects as possible, examining their strengths, weaknesses, and what they can bring to an NFL franchise. These players could be potential top 10 picks, all the way down to Day 3 selections and priority undrafted free agents. Today, I’ll be profiling a defensive back that has impressive college production, but his measurables make him a difficult projection as to where he will go in the 2022 NFL Draft.

— Filled-out frame with ideal bulk given his size
— Has experience lining up at split zone safety, deep single high safety, and in the slot at the nickel/dime
— Communicates well on the backend of the defense when getting others lined up
— Wins on his instincts and awareness in the passing game
— Allows the QB’s eyes to show him where to go in terms of breaking on a pass or being in the right spot to make a play
— Has 11 INTs in three seasons as a starter with notable ball production in high school as well
— Has a knack for being in the right place at the right time with the ball skills to convert
— Can click-and-close on passes when the ball is in-front of him to challenge completions
— Will stick ballcarriers as a hitter with his small frame, being willing to put his body on the line
— Instincts show up in run support as well, coming downhill in a hurry to aid on the edges
— Doesn’t have an issue of “want-to” as a hitter, being willing and capable of sticking his face into the fan

— Lacks the ideal size and length for the position at the next level
— Has short arms which can lead to him being late to arrive to the ball to deflect passes or not finish tackles
— Is a willing tackler, but needs to tackle more consistent angles to the ball
— Struggles when playing against size on an island in coverage and will get bodied by bigger receivers on the jump ball
— Can be a tad aggressive at attempting to make the big play and may find himself out of position
— Doesn’t have great range on the backend as a deep safety due to stature and limited deep speed
— Questions linger as to whether his best fit is as a smaller FS or a nickel corner at the next level

— Redshirt Junior prospect from Carrollton, TX
— Deemed a four-star prospect in his recruiting class and chose Oregon over the other top Power Five FBS programs
— Enrolled in January of 2018 and utilized a redshirt after appearing in three games and recorded three tackles in limited action
— Played and started in 13 games as a redshirt freshman and recorded 46 total tackles (29 solo), one TFL, two PBUs, and four INTs
— Played and started seven games in a pandemic-shortened 2020 season and notched 46 total stops (24 solo), one forced fumble, one fumble recovery, two PBUs, and an INT
— Played and started in 14 games in 2021 and finished the season with 77 total tackles (44 solo) one TFL, one forced fumble, six PBUs, and six INTs
— Consensus First Team All-American (2021), First Team All-PAC 12 (2021) FWAA Freshman All-America team (2019), The Athletic Freshman All-America second team (2019)

Verone McKinley III has had a knack for picking off passes since his days in high school, recording nearly 20 INTs before deciding to sign with the Ducks and head to Eugene to continue his playing career in college.