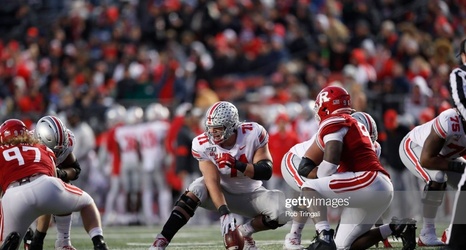 From now until the 2021 NFL Draft takes place, we hope to showcase as many prospects as possible and examine both their strengths and weaknesses. Most of these profiles will feature individuals that the Pittsburgh Steelers are likely to have an interest in, while a few others will be top-ranked players. If there is a player you would like us to analyze, let us know in the comments below.

-Powerful run blocker with violent hands and impressive leg drive
-Explosive first step at the snap; body is in sync early in rep
-Can flat-out overwhelm defenders with length inside
-Smooth player overall inside, likes to be on the move
-Sound reaching the second level, able to adjust run fits on the fly when climbing
-Has the size, strength and short-area quickness to shift out to guard in a pinch

-Heavy feet overall in pass protection and struggles to consistently mirror
-More of a waist bender inside; does not sit into his hips well
-Hand usage needs a lot of work; must improve hand-fighting technique, needs to take advantage of length and lock out
-Tends to search for the kill shot a lot, which leads to whiffs in space
-Gave up far too much pressure inside the last two years

-Two-year starter at Ohio State, racking up 22 starts
-Played in 31 career games for the Buckeyes
-Named First Team All-Big Ten in 2020; Second Team All-Big Ten in 2019
-Mother, Julie, is in the University of Dayton athletics hall of fame as a basketball player
-Father, Brad, was an offensive lineman at the University of Kentucky between 1984-87
-Declared for draft as a redshirt junior

While the offensive tackle class is incredibly deep in the 2021 NFL Draft class, center isn’t quite as deep, considering there are not many high-end players in the class at the position.