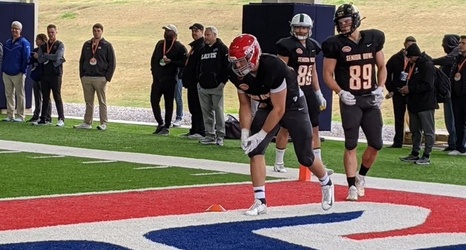 -Tall, well-proportioned frame and carries it well; smooth athlete
-Versatile TE that lined up all over formation at Dayton
-Consistent, clean releases off the ball when lined up in-line; rarely knocked off his route early on
-Huge catch radius that allowed him to dominate the competition
-Knows how to work himself open and show his numbers against a variety of coverages
-Possesses impressive explosion and speed at the top of his routes, allowing him to create easy, consistent separation

-Struggles with pad level as a blocker and is still trying to find leg drive and strength in-line
-Strike point is a mess on the move, which causes lack of power; needs to develop proper technique when asked to pull or down-block
-Limited route tree for the position; lots of seam/verticals, shallow crosses, delayed leak, etc.