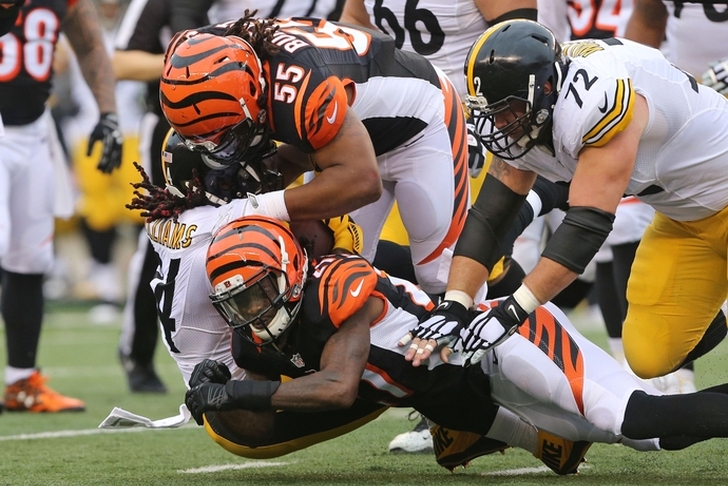 The way Pittsburgh Steelers RB DeAngelo Williams sees it, the Steelers should have made it to Super Bowl 50. However, that Super Bowl run was ruined by the hit on WR Antonio Brown from Cincinnati Bengals LB Vontaze Burfict.

"For me, my rival throughout my year will be the Cincinnati Bengals," Williams told ESPN. "I don't think there was any doubt in my mind if AB was not interfered on or hit the way he was hit, however you want to label it -- there's no doubt we go on and give the Broncos hell."

The hit from Burfict gave Brown a concussion that resulted in him sitting out the Steelers' playoff loss to the Denver Broncos. Of course, the flag that came on the hit was a big factor in the Steelers beating the Bengals. When Burfict got wind of Williams' comments, he didn't hold back in responded to Williams on Twitter.

@DeAngeloRB u didn't even play nor help yo team and I'm happy to still b in y'all heads 4 months later #gethealthy   https://t.co/o5Hg1RxkeD

Burfict's comments resulted in a full-on Twitter war between Burfict and Williams.

I'm just happy you unblocked your Twitter account what are you doing when u not costing your team games https://t.co/qVRfx7NAIE

Not a great come back I'll teach u how to keep my name out mouth tho remember I have to tackle you https://t.co/K0vY4izHLJ

we'll be looking forward to it after your vacation and give everyone my regards please https://t.co/WXizcUBgoh

You right I am backing the best back in the league u are talented but your inability to control yourself hold u back https://t.co/NbGbygGRDN

DeAngelo got the last word in, which means by the laws of Twitter, he won the Twitter fight. Although, Burfict did land one final shot against Steelers' fans.

Steelers fans is so salty lmao stop @ me

There is no love lost between the Steelers and Bengals. We'll likely be in for more hatred and personal fouls when the two teams play this year.