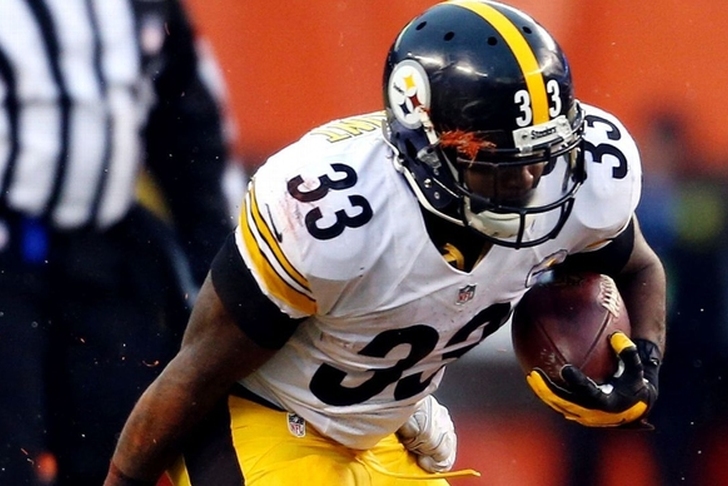 The Pittsburgh Steelers and Cincinnati Bengals simply don't like each other. That disdain was taken to an entirely new level in a bizarre 18-16 road win for Pittsburgh in Saturday night's AFC Wild Card game.

Personal foul penalties were the name of the game all night long, and it would reach its first crescendo with a crazy sequence that saw Bengals RB Gio Bernard hammered on a high tackle seen by many Cincinnati players to be a dirty hit. The teams would push, shove and scuffle from there, including a near fight as Bengals RB Jeremy Hill confronted a group of Steelers defenders shortly after the Bernard hit.

All of the commotion, though, seemed to ignite a fire under a Bengals team which saw offensive drives end in punt after punt over the game's first 45 minutes. Cincinnati scored 16 unanswered points to take a one-point lead in the fourth, putting a woeful first three quarters on offense behind them.

However, the Bengals would self destruct late in historic fashion late -- picking up 30 yards of personal foul penalties on a helmet-to-helmet hit to by Bengals LB Vontaze Burfict on Steelers WR Antonio Brown and a 15-yard unsportsmanlike conduct penalty after cornerback Adam "Pacman" Jones made contact with an official. Both of those infractions came during the same sequence.

Those penalties basically handed the Steelers a chip shot 35-yard field goal nailed by rookie Chris Boswell with under 15 seconds to go. That kick put the Steelers ahead to stay at 18-16 with just seconds to go and ended what will go down as the most troublesome, gutting defeat in Bengals franchise history.

In between a one-yard Jeremy Hill touchdown run and a 36-yard Mike Nugent field goal for the Bengals which cut Pittsburgh's lead to 15-10 in the fourth, Steelers quarterback Ben Roethlisberger was carted off the field after falling on his right shoulder at the end of a Vontaze Burfict sack. Backup QB Landry Jones could do nothing of note in relief of Roethlisberger as Pittsburgh punted the ball away on his first two drives under center.

The air was taken out of the Pittsburgh sideline on the Bengals' possession after Jones' second failed drive, as AJ McCarron captained a seven-play, 45-yard drive capped off by a 25-yard touchdown pass to AJ Green -- the first TD catch of AJ Green's playoff  career.

Things would get completely wacky from there, as the teams traded takeaways on back-to-back plays. Bengals LB Vontaze Burfict seemed to have virtually iced the game with a pick of Landry Jones, but the Bengals gave the ball right back on a Jeremy Hill fumble with 1:36 left.

Steelers head coach Mike Tomlin had seen enough of Jones, handing the ball back to Ben Roethlisberger who finally convinced the Pittsburgh HC that he was okay enough to get back in the game. With three timeouts at his disposal, Roethlisberger marched the Steelers past midfield into Bengals territory with 22 seconds left thanks to a 4th-down conversion on a pass to Antonio Brown.

From there, the Bengals' personal foul parade cut the legs out from under them and sent the Steelers into the AFC Divisional Round -- a brutal loss which makes five straight Wild Card defeates for Cincy during their stretch of five playoff appearances in a row.

As for Pittsburgh, they move on to a road showdown with the #1-seeded Denver Broncos next week. It's unclear whether or not they'll have a healthy Ben Roethlisberger with them on their trip to Colorado. On the other side of the AFC bracket, the Kansas City Chiefs will travel to Foxboro to face the #2-seed New England Patriots. Back to the Pittsburgh Steelers Newsfeed
24 shares Share on FB Share on Twitter