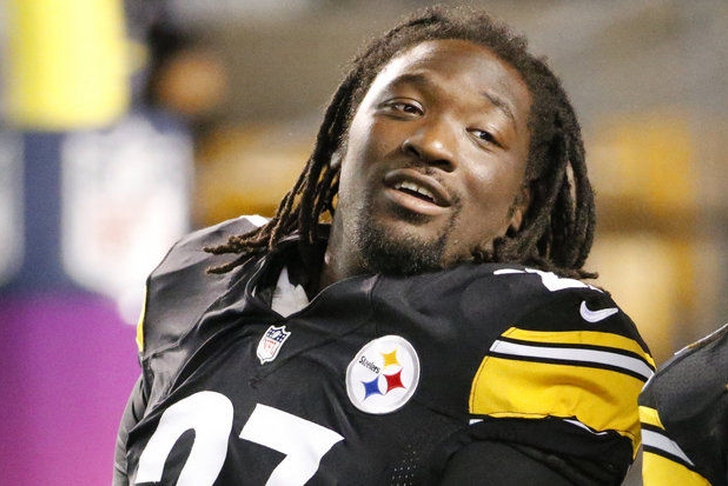 Here's what LeGarrette Blount had to say at Super Bowl media day when asked about his mid-season exit from the Pittsburgh Steelers:

"Did you know you had a job with New England before you left Pittsburgh?"

"Why would you leave if you didn't know in the back of your mind that they were waiting to call you?"

And when Ridley went down with a season-ending knee injury in mid-October, rendering the Patriots with a hole at running back?

"He's one of my closest friends," Blount said. "When he went down, I was probably one of the first guys to contact him, and made sure he was OK."

Over the next five weeks after Ridley's injury, Blount carried the ball 28 times for 53 yards, including zero in his final game for Pittsburgh – a 27-24 win over Tennessee on Nov. 17. That final game caused Blount to snap, ending with him walking off the field before the game had ended, and straight to the team bus without showering. He was cut one day later.

So, at first glance, it seems like Blount had been told - or at least hinted - that he had something waiting for him in New England. While it isn't hard to connect the dots to tampering...it gets tricky.

If the Patriots contacted Blount directly to tell him about the job, that would definitely constitute tampering, and the league would no doubt be less than thrilled. If Blount had merely heard 'rumors' from Ridley, Vereen, or McCourty, there isn't a whole lot the league can do. While the end result is no different - Blount leaves midseason and walks right into a bigger role with New England - there's a pretty big difference in the process that led to that point, and unless the league has reason to believe the Patriots cut out the middleman and tried to lure Blount away while he was still a Steeler, they aren't going to do anything about it.

While this is an unimpressive and unprofessional look for Blount, at the end of the day, it doesn't really matter. The Steelers now have the freedom to give Le'Veon Bell all the carries he wants, and they also don't have a frustrated Blount stirring things up behind the scenes. While the Patriots may have gone about their business in a way the league wouldn't be happy about, they once again managed to do it without leaving any openings for the NFL to investigate...and we may never know the real story. Blount is away from Pittsburgh in New England, and at the moment, both teams are perfectly happy with that outcome.